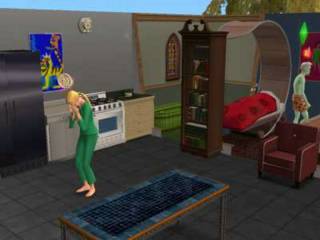 Sims 2 Player narration - it works! And players can pulish their narratives for others to read. Here is my little attempt :) 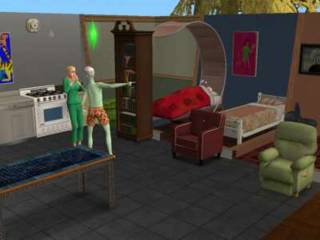 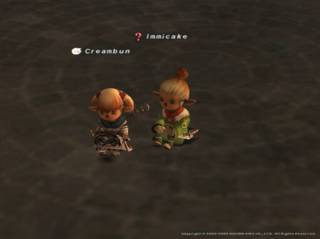 First i was totally confused in FFX! Online - i couldnt even work out how to run :). But I was rescued by two old friens from AC2 who taught me the basics and showed my around. I dont think i would have made it otherwize. Creambun here on te picture (Im immicake) still has, just like me, his account still running at AC2 but he spends most his time in FF. He said that FF, unlike AC2 is a finsiched game while AC2 still feels like a beta. And that FF has much more depth to it. Oh i look forward to this. It also turned out that about 5 - 8 people that i know from AC2 now are in FF. Oh yes.

It's remarkable how a strong obsession pans out. It feels sudden, but i know it is not; the past month or so i lost interest in SWG. I'm moving on to Final Fantasy where members of my old guild from Asheron's Call 2 are waiting for me.
Two collegues of mine, Christopher and Martin, preached last week when we were in Germany on a kickoff for an integreated eu project (IPerG) that "What you give is what you get" They were talking in the context of LARPing and pervasive gaming, and others had said it before with other words, but its relevant for me when it cames to SWG. For some reason i got so obsessed with grinding my way up to master Droid Engineer and selling droids in my shop. That was so timeconsuming that my time (or focus) didn't reach out to socialize much, not even with guild memebers (and it is a very nice guild). Now when i logged on i was close to my shop, loads of people has bought droids, and my character is rich. But I couldnt care less. My own grinding killed the game. Raph Koster said something on the MUD Dev conf: "The players can grind the fun out of anything" And he drew a picture of a player treading a mill. So in this game i became the Achiever with the big A. Not the power gamer type that Taylor wrote about 2003, but the pure bartelian achiever... Piagets poisoned game.

When I came to stockholm from Bonn last weekend i bought the Sims 2. They sell it at seven eleven! I spent the whole weekend in trance, only with a little break to go through the literature for the phd seminar on virtual communities and for having a dinner with old friends (the kind of friends that feel more like family). Very interesting to see how well the goal and fear settings work in combination with the needs of the sims. Yesterday I created a fairly dramatic narrative using the story tool. Very content with myself of course since the game is almost a rolemodel for the narrative layers model i present in my latest paper. For drama though it is cruical that not all information is revealed. In my case - if i had checked out all my families in the neigborhood the type of dramatic mistakes due to characters lack of infromation that happened in my story would not have happened.

It's not so bad in Visby now. It is getting colder, so i have been putting fire in the tile oven. I went out to shop some food and there was a market on the square. On my way there i passed the two heads of the medieval week, beautifully dressed in crimson and blue. And the autumn raspberries are ripe in the garden.