Computational modelling in games at BIRS, Banff, Canada, May 2016

I spent last week in Canada, at the beautiful Banff International Research Station for Mathematical Innovation and Discovery up in the mountains, together with a group of very smart people. We gathered to have workshops about computational modeling in games, and it was amazing. It was organised so that we, during the 5 day workshop each partook in three workshop groups with 4 - 6 people in each, digging into different themes. Each day was started by a series of idea seeding talks. How these workshops turn out in these think-tank gatherings is always a matter of chance - it depends on the moods of the participants and (the horror!) whether one spends valuable time arguing about basic definitions or not. I was lucky, three out of three workshop groups i was part of were really good.

The first day I was in a group discussing the design and modeling challenges of story making games. We (Anne Sullivan, Erin Swink, Eddy Boxerman, Mark Nelson, Josh McCoy, and myself) dug into the long history of tarot as a co-creative narrative practice, and into the situation where children tell a grown-up “Tell me a story!”. We ended up making a game using a deck of tarot cards where the edges of the cards denoted that the story needs to contain something related to the pictograms. The illustration below is just a small subset of what we discussed.


Workgroup: In search of game-changing floatsam

The second workshop turned into being about player experience. We (Katherine Isbister, Arnav Jhala, Georigios Yannakakis, Joris Dormans, Josh McCoy and myself) were frustrated by the state of the art on two levels:


We flipped the coin, and built an approach where we text mine reviews, fan fiction, feature-request blogs and other existing re-tellings for the aspects we care about - liminal experiences, mixed emotions, etc etc. Arnav started text mining the very same evening, and I painted illustrations of our thinking. This is likely to become a sharp project soon.

As a personal note, this was an important day for me, since i had a revelation about the development approach to take in my next project which has the working name “Reflection.”. I went to the workshop with the hope to get some new ideas and inputs to use when I would re-iterate my old mind-module for the purposes of the new project, expecting to *add to* and *enrichen* my existing approach. Instead, to my joy and butterflies in the stomach-feeling, I will do something different - I will scrap the top-down approach of modelling a problem according to our current spotty understanding of what a human and a emotional problem space is, and instead use a bottom up approach where I generate from the inputs given by the player - well to a much higher degree at least, since that was part of the plan all along. This means I get to use approaches i haven’t tried before, and I’m especially looking forward to playing around with PCG methods. This thinking came about when listening to Katherine Isbister talk in the morning, and I shouldn’t be surprised. I first met her at a workshop in Banff in 2002 (“Artificial Stupidity”), and had a good conversation with her on the shuttle to the airport. That trip in 2002 was what inspired me to try out research, and when I got home I started organising to do a PhD. It seems symmetrical that Katherine and I  were booked at the same shuttle to airport this time too, 14 years later.

For our presentation of the work I made two paintings. The first one pictures how a player dives down into a game and experiences something important. As they reflect the view of the experience becomes a bit clearer (see the little red blob in the middle-image). When the player is ready to tell someone else about the experience it is getting even more clear. We figured that if we can mine for these re-tellings we would filter out a lot of noice. Compare having a reflected upon retelling “this was important and meaningful” with doing realtime biodata readings and trying to interpret those (not devaluing that work, it is also important, this was just our current take on it). 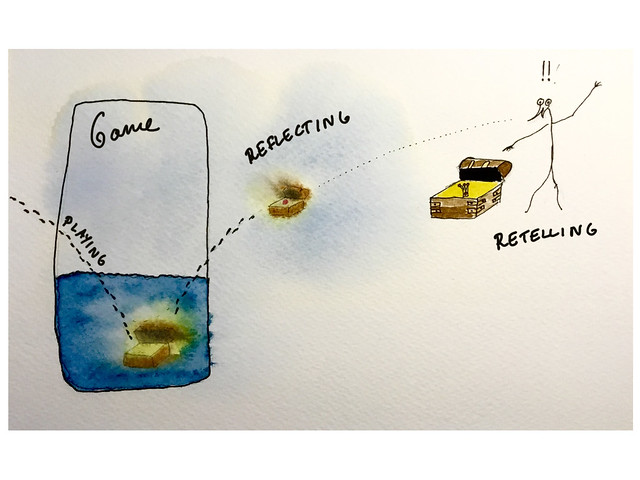 In the second painting we mine for these re-tellings. The islands are known things we already know how to measure, but we are looking for the flotsam. 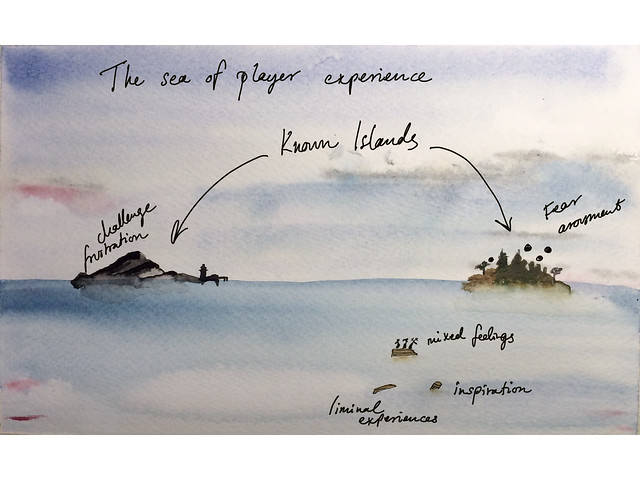 There’s a lot to mine, that’s why our mouth is so big. 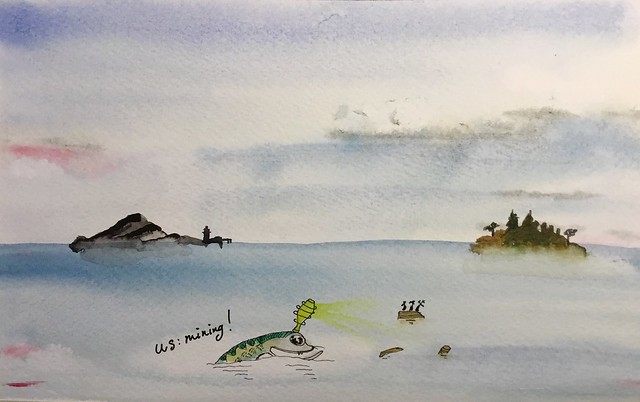 Enthusiastic about my changed development approach for “Reflection” i joined a workgroup on game design patterns and mechanics for PCG the last day. We (Alex Jaffe, Michael Cook, Andy Nealen, Mike Treanor, Paul Sottosanti, Eddy Boxerman, Steve Swink and myself) ended up outlining the state of the art in terms of tech, and in games, and the main design challenges. Then we  started sketching on a game where prolepses of different length would give hints to players’ traversal through a story scape. (they’d go to schizophrenic pre cog whose metaphoric speech would be of different levels of clarity depending on how far into the future the player would want her to gaze).

I also gave a talk: Computational Narrative and Narrative Systems. Michael Mateas and Andy Nealen had provided me with an abstract to use as a starting point:

I started out making a talk where each of the questions were adressed in a section. It became a quite long and arid deck of slides. Then it struck me that


So I re-made the talk. I started out listing the challenges for computational narrative that we came up with at a similar seminar, one that was held in Dagstuhl in 2012. Interestingly, a lot has happened in those 4 years, much as an effect that the literacy in building expressive systems has dramatically increased - I can’t see another explanation for that there has been so many really good and ambitious - successfully ambitions - projects released lately. I’m thinking of IceBound, Blood and Laurels, and 80 Days among others. At the same time, there is the notion that the field of computational narrative has harped on unceccessfully hopping into rabbit holes, fighting wind-mills and chased impossible grails. In the talk, I made the argument that the field of computational narrative can only seen has having failed (illustrated by a screenshot from wikipedia) if you have a very fixed and narrow image of what the grail that is being chased actually look like. If you instead look at what is actually out there, both in terms of novels coming alive, games with high quality narrative, and story making games - well the reality speaks for itself. Computational narrative is thriving. The talk was video-taped, and is accessible here.


All in all, the seminar at BIRS was immensely inspiring and productive. I believe a lot of future projects and cooperations were seeded during these intense days, for all of us. I am deeply grateful to The BIRS Center, and to Michael Mateas and Andy Nealen who organised the seminar.

Links:
Some photos from the seminar, my album at Flickr
The seminar's page at BIRS