An interesting day in the INDCOR project.

- we had an online gathering where

- we announced how to evaluate artefacts of last years complexity jam

- announcing Trinity as the next host for complexity jam

- were treated by amazingly interesting talks about how conspiracy theories are formed and structured as interactive narratives, both in participatory creation and as artefacts.

We had planned a social event to talk about the recent developments in the project, notably that we are well on our way towards making our encylopedia of interactive narratives into a book. A major academic publisher is interested, and the EU COST association is graciously agreeing to cover the open access fees of the publication, and this makes us very happy. The WG3 (evaluation) is doing thorough work of evaluating the artefacts that came out of the first complexity Jam, and we were happy to announce that the next host for the ComplexityJam will be Trinity College Dublin.
We had planned to tell all this in person at a social online gathering for the whole project, which now spans 37 countries (mostly in the EU, but also includes the USA and Singapore), bringing together a mind-blowing network of experts. For the gathering we had invited researchers from UC Berkley and UCLA who are doing extremely important work on how conspiracy theories are formed, and how the conspiracies grow as a collaborative consensual function in online communities. We can learn a lot from this work, and gain an understanding of how different actants propagate “truths” by “discovering” them through game-like “detective work” that create inherent reward structures for the participants.

Well, on to toda's meeting.
Our Facebook page for our research network got banned! The three colleagues who were administering it even got their *personal* accounts banned, so since yesterday we have been texting each other instead of using FB messenger when talking practicalities about today’s meeting.
It is quite ironic that the FB algorithm bans researchers doing work on computational methods to understand and detect how conspiracy theories are structured in online communication. Hilarious, but in a dark way.

Todays’ meeting,
Our social chair Maria Reyes organised it in Gather.town, made sure we would listen to each other, and that we hear all the presenters. Our chair Hartmut Koenitz gave a rundown of the happy news with our encyclopaedia, but then I lost the connection unfortunately (bad, because I’m the vice chair, and could have said a few words). I believe he talked about the FB debacle after that. 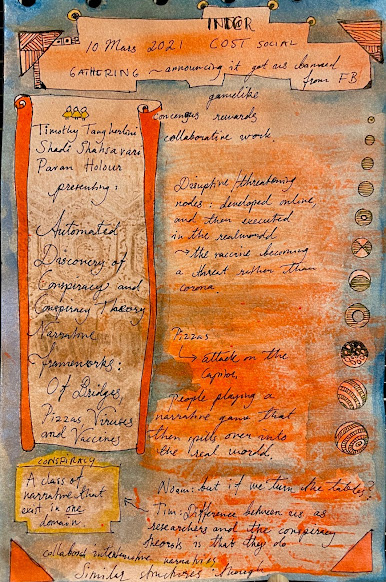 I was able to reconnect to Gather.town in time to hear the presentations from the researchers at UC Berkley, professor Timothy Tangerlini and his group, among them Shadi Shahsarvani and Pavan Halour. Such interesting work on conspiracy theory formation, grounded in scraping of online data.
Towards the end, one of the INCOR members, Noam Knoller, asked: What if we turn the tables around? Wouldn’t your narrative, based on your research, be possible to be interpreted as another conspiracy theory? (I came to associate the Medium article that circulated a mont back or so, on how Alternate reality game structures are similar to conspiracist theory mechanisms: https://medium.com/@registrarproject17/qanon-is-an-enormous-alternate-reality-game-arg-run-by-malevolent-puppetmasters-27e6b098ce9b) Timothy had a very interesting response to the question. He took it fully aboard, eg, why would our interdisciplinary approach when trying to understand how conspiracy theory formation works be different to an actual conspiracy theory? Tim was, in the QA (and forgive me if I misinterpreted)  outlining two main differences:
1) in research, the activity is not as game like - there are not the same reward structures involved as when you are in an online community which “discovers” clues in reality that may support the theory you are going for.
2) Conspiracy theories is a class of narrative that finds its explanations within *one* domain, rather than several.

I liked hearing that, what Tim said. I have to admit though that it could be because of a personal bias, just being  comforted by seemingly ordered mental lists and categorisations that help me understand this complex world we live in. In retrospect, I wonder whether I’m fully on board  with Tims first point of the explanation, knowing about the intrinsic and social rewards of ARG- and pervasive games. The other however, the very example of “Pizzagate”, a conspiracy theory featuring Hilary Clinton and satanists and whatnot seems to span a multitude of domains. Perhaps what Tim was aiming at - or maybe just what I’m thinking now - is that it is more lika a singular explanation model rather than a knowledge domain that is pushed. The win condition would be to get all pieces of the reality puzzle to fit. Finally, we would understand this weird reality we live in and take action. While acting, we would be  fully convinced that we do the right thing, without harrowing doubts, because we even found the clues ourselves, so we *know*.
So yes - it is not a far fetched to question what the difference is between being a conspiracy theorist and a scientist. Or a preacher for that matter, given the definition of what a religion is - a belief system.
I will likely not experience that luxury of ‘knowing’ in my life. I’m deeply ingrained with philosophy teaching I got when young, where  the very notion of an absolute truth is refuted.
How I would love if there was something like that, an absolute truth! Or an idea of what is really “good” - so I could do it. But alas, here I stand. Here all of us stand, who have grown up questioning everything.  Critically. Doing our best. Never knowing what is actually “best” and having to accept that fact.*  Also at the moment banned by Facebook, which adds a little bit of spice and pizzas to our efforts. But worry too. I think of my friends in countries where things cannot be said. And of some of my students, who are researching government power and its execution. Say no more. Banned I will be if I continue telling you. Friends. We do our best. Peace and love.  /m

*The thing is, that in our hearts, we know. No matter the rationalisations and the futile search for an ‘absolute truth’. We steer the compass towards acceptance, love, compassion and generosity, and there we have it.