Freefrom notes from GamesInAction Conference in Gothenburg 14th of May. 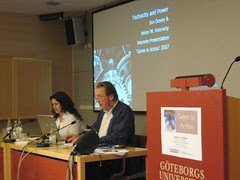 Swedish state policy. Education and research in the area.

HK and JD: grains of sand in the oyster.

. Refuses to let go of our relationship of power and technology. Tech in modernity and industrialisation. Reinscription of modernist dreams of power and machines. Matter transformed to abstract calculation. Turkle notes this in the Eliza program. Markuse's One Dimensional Man. Rationalisation applied to digital society. Kellner. Dominant technologies. Hegemonic. Themeberg. “working with wood is to be a carpenter.” Viral communication – non-hegemonic.

The idea of the cyborg and the idea of the hacker. Runs through the biographies they’ve looked at. /* makes me associate to the speech Bartle made at Austin Game Conf 2005 where he drew up a picture of those who made the first muds, and the culture around the development in the late 70ties and early eighties. */

Dominant technicity in this context. 2 aspects:

Technicity is ever shifting. Dominance not stable, not guaranteed. 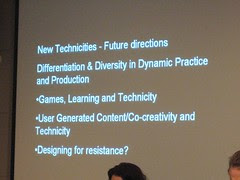 See some of the slides (link to photos on Flickr)