On the last and fifth day of GDC my energy started to run out, but i managed to bounce up early enough to get to 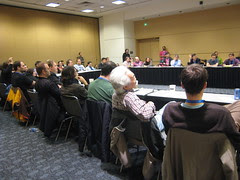 ...and to:
Hitting the Jackpot in the MMO Game Space
Allen Partridge 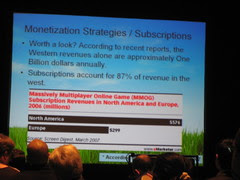 ... but didn't really wake up until
Defeating Designer's Block, Tools to Boost Creative Output – Part 2: Putting the ideas into Practice
Graeme Ankers
This was an excellent session. My notes won't do it justice so i recommend downloading their presentation when it comes online. I photographed some slides for my own memory. 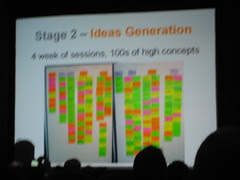 At 12.00 I faced the difficult decision of either going to listen to rants, or to go listen to what Damien Shubert had to say about writing game design documents. In the end i figured that the rant would probably be live blogged anyway so I could read what was said later, and I really wanted to hear Shubert. I heard a speech by him at the Austin game conference in 2005 with was excellent (about what VW designers can learn from casinos) so i found myself hobbling towards west 2001.

Writing Great Design Documents
Damion Schubert
I was not disappointed, Shubert's speech was practical, down to earth, and very sensible. A lot of it may seem like common sense and "hey I already knew that" but how come not all GDDs are prefect then? Shubert has been kind enough to share his slides here. 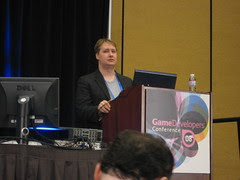 Regarding the rants, Liz Lawley posted extensive notes about the rant on Terranova! Thanks for that!

After a very quick lunch (picking out the meat from one of them lunch boxes) I tried to hurry off to the hotel for a power nap. I wasn't sure if my throat was sore from speaking in loud environments or if i had a flue coming (it was a flue). But I ran into Victor, also tired, and we came to the rational conclusion that one might never rise from a nap, and that a screwdriver contains c-vitamins. 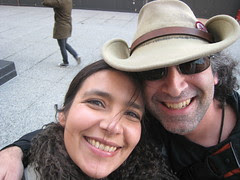 Next i had a meeting with the company HumanNature and the team behind a gorgeous personality test game for the DS. I fell in love. So instead of listening to Raph Koster's speech about Meta Place (again trusting in Koster's own documentation to be available later) i just played and played and asked and asked. 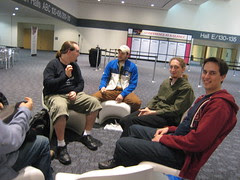 The AI Dinner in the evening was very enjoyable. I both got to talk to people I wanted to speak to and to people I there and then realized i wanted to have conversations with. 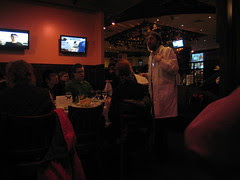 Later on I joined a bunch of people who knew how to end the conference in style:
by playing. 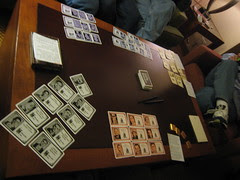