I made it to

I have been following Multiverse's work since i first got to know about them through a press release, i think it may have been two years ago. I am fond of their philosophy and approach: the revenue model is based on sharing future income from a game when it starts to gain revenue, not before. There is also a preparation for trading of media assets between developers.
Here is a slide showing a few games currently under development on the Multiverse platform: Besides multiverse i find Raph Kosters Meta Place intersting, as well as the Unity engine.
In the QA after the speech it was mentioned that Militverse are putting a special effort into the avatar parts, which renewed my interest.

I remember so well when I, a few years ago, spoke to someone from Sulake who humbly explained that Habbo Hotel was a retro inspired virtual world for teenagers and that people do a lot of role playing there... so that I might find it interesting from that point of view. Coming home i created an account and did some web searching... finding that, at that point in time, they had 10 millions users. I couldn't believe my eyes - how could i have missed something so huge!?
Today it is even more huge. Sulka Haro told us that Sulake expect to break the 100 million user wall during 2008.
Habbo Hotel started in Finland, and now basically 100% of the Finnish teenagers at some point log in to Habbo. I wonder how that will impact the future culture, to have such a generally shared cultural experience. People who, later in their life, find that they can bond with strangers by locating each other in the memory of the virtual space of Habbo.
Sulka Haro affirmed that the inhabitants of Habbo do spend much more energy role playing than players of MMOs such as WoW. 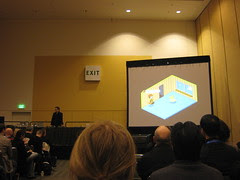 In the evening
we went to some parties (microsoft and zeemote) that had open bars but very loud music, so we quickly dashed off to dinner. Ended the evening at Marriot with interesting discussions and giggles.