These are my free form notes from the Seminar in Tampere on Playing Roles: 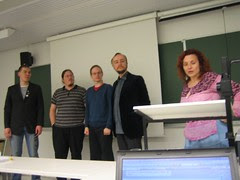 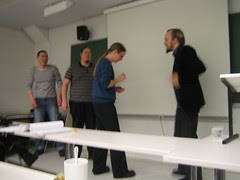 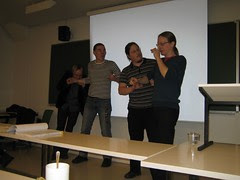 Discussion
Theatre games and role playing games are very alike, maybe similar?
Craig: but arent they fundamentally different, re having audience or not? Not ongoing process.
Flood: no audience in theatre games. Performance for the other participants. Byt yes, not ongoing.
Martin E: Maybe theatre forgot role players, but role players (at least in sweden) never forgot theatre. Reading and using existing thinking tools in impro. There is reciprocity efen if the people don't meet.
Flood: Interesting, first time in nordic context, In canada, US and Singapore, Asia the fields are very far away from each other.
Not bridged globally.
Stenros: this done a lot in swedish freeform. The description in the paper follows the public view on RPG, but when it is played it is very alike.
Annika: i did a profiling for LARP participant, a large part of them had theatre experience, but not table top or online rp experiences. Closer to theatre really. Different goals, they do it for the experience themselves, while in theatre the goal is to learn about acting. Different goal structures, for r players the experience itself is the goal.
Flood: but you can turn that around. Why is the the larp situation so different here?
Pohjola: role playig art, performance art, rp bordering that in 10 years or so. Americans call what we do impro theatre.
Flood: a lot of hack and slash in american larps. Frustrating for those who want to roleplay. Record: 3 characters in 10 minutes.
Staffan: check out dragonbane. Trying to define their way of rp, seeing differences from other styles and groups in europe.
Petri: Commedia del'arte?
Flood: histoic beginning. Resurfaced. Close tie. No role swiching.
Lisbeth: what direction now? Not only persistent character, aslo persistent universe. How performing differently re persistence?
Frans: TV series out of larp events. Boundary work. How record what happen to game characters? How make it attractive to an audience?
Flood: the now. The live thing.
Craig: misleading to generlise about role playing games, a lot of distinctions re motivations, play styles etc.
Flood: agree. Starting w big picture.
Martin E: imortant to remember difference between performance and immersion. RPs in north, a lot of them want the hotness, while cold acting might be more efficient for performancee.
Flood: no! Hot is better!
Martin E: Larp as theatre sucks as!
Stenros: Why did we swich roles?
Flood: all experience each role, illustrating for styles.